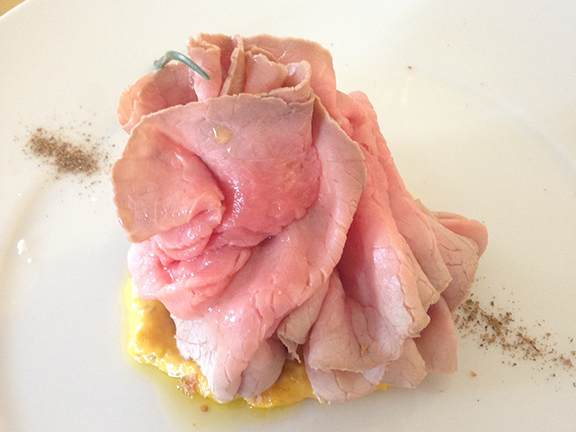 Above: Today, the classic Piedmontese dish vitello tonnato — veal with tuna sauce — is typically made using homemade mayonnaise as one of the ingredients in the sauce. The addition of mayonnaise seems however to be a recent variation.

Not much is known about the origins of the famous Piedmontese dish vitello tonnato — veal with tuna sauce. We have much to say on the topic of his celebrated classic. And this is the first in a series of posts devoted to it, its history, origins, and contemporary interpretations.

But before we dive into our gastro-philological treatment, we wanted to share an original English translation of Pellegrino Artusi’s recipe, first published in 1891 in his La scienza in cucina e l’arte di mangiar bene (Science in the Kitchen and the Art of Eating Well), a book widely held to mark the beginning of the modern (not contemporary) ear of Italian gastronomy.

Note the absence of mayonnaise.

We wanted to start here because this post will serve as a reference for forthcoming posts.

Here it is (as translated by our blogmaster, Jeremy Parzen):

Take a kilo of milk-fed veal from the thigh or rump, all in one piece and without any bone attached. Remove the skin and fat and then stud the meat with two anchovies that you have previously washed, split in two, cleaned of its bones, and cut sideways so as to obtain eight pieces.

Tie the meat but not too tightly and boil for an hour and a half in enough water to cover.

Before adding the meat to the cooking water, add a quarter of an onion studded with two cloves, a bay leaf, celery, carrot, and parsley.

Season the water generously with salt and bring it to a boil before adding the meat.

Once it has cooked through, strain and dry the meat before letting it cool. Once cooled, thinly slice and reserve in a narrow serving dish covered thoroughly with the following sauce.

Using the blade of a knife, mash 100 grams of olive oil-cured tuna with two anchovies. Make sure to mash well. Or better yet, pass through a sieve adding a generous amount of olive oil, a little bit at a time, and lemon juice so that the sauce achieves a liquid consistency. Fold in a handful of strained vinegar-cured capers to finish the sauce.

Serve the vitello tonnato with its sauce accompanied by lemon wedges.

Reserve the cooking water from the veal to make a risotto.

This website uses cookies to improve your experience while you navigate through the website. Out of these, the cookies that are categorized as necessary are stored on your browser as they are essential for the working of basic functionalities of the website. We also use third-party cookies that help us analyze and understand how you use this website. These cookies will be stored in your browser only with your consent. You also have the option to opt-out of these cookies. But opting out of some of these cookies may affect your browsing experience.
Necessary Sempre abilitato
Necessary cookies are absolutely essential for the website to function properly. This category only includes cookies that ensures basic functionalities and security features of the website. These cookies do not store any personal information.
Non-necessary
Any cookies that may not be particularly necessary for the website to function and is used specifically to collect user personal data via analytics, ads, other embedded contents are termed as non-necessary cookies. It is mandatory to procure user consent prior to running these cookies on your website.
ACCETTA E SALVA