The importance of being Cannubi (and its subzones) 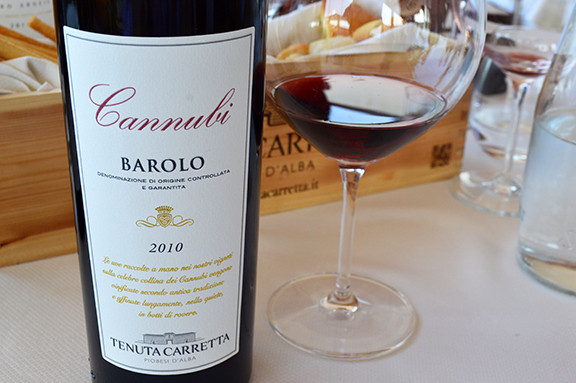 The following post was translated from the Italian from a letter addressed to Tenuta Carretta blogger Jeremy Parzen by Tenuta Carretta CEO Giovanni Minetti. It was written in response to leading Italian wine blogger Alfonso Cevola’s post “The Cannubi Conundrum ~ If 15 was 30.”

I was eager to read Alfonso Cevola’s post on Cannubi and I found it very interesting. I can’t thank him enough for the appreciation he expressed for our Tenuta Carretta 2010 Barolo Cannubi that I had the great fortune to taste with you both in Dallas. It was a magical evening and a thrill to see you both.

Like Alfonso, I am a fan of mathematics. And I share his passion for seeking out solutions to seemingly inexplicable enigmas.

It’s not my intention to come to the defense of my colleagues who produce Barolo Cannubi. They certainly don’t need my help.

But I do believe that there is an unfortunate misunderstanding at the bottom of all of this. And I would like to share my insights so as to clarify the confusion.

As the president of the Barolo consortium (and then later as the body’s vice president), I was involved in the drafting of Barolo appellation regulations that included the so-called Menzioni Geografiche Aggiuntive or added geographic designations. Cannubi was one of the designations that were addressed in this process. It represents a unique case not only in the panorama of Barolo production but also, I believe, in Italian wine as a whole.

Every owner of rows planted to Nebbiolo in Cannubi was granted the right to use the mention of Cannubi at the estate’s discretion, whether on its own or combined with the following specifications (and I’d like to emphasize that these mentions are optional and not mandatory): Boschis, San Lorenzo, Valletta, or Muscatel. Obviously, the estate must own rows within the delimited areas specified on the label.

The only designation that cannot be used is Cannubi Cannubi, which doesn’t exist. Those who own rows in the “heart” of Cannubi cannot add anything to Cannubi. It seems like a paradox (and maybe it is) but a producer who in theory would have the right to be the only one to use the designation Cannubi is, in fact, penalized by those who, for example, own rows on the edge of Cannubi and can label their wines as such.

At this point, it’s easy to understand how it’s practically impossible to come up with clear-cut figures in this case. It’s really a question of an equation more than a solid figure. There are so many variables and only five constants, each of which is represented by total surface areas within the Cannubi macro-area and in the micro-areas within it. Their borders have been established in accordance with the surface area planted to Nebbiolo for the production of Barolo.

Thanks to the excellent work of Alessandro Masnaghetti, it’s easier to make the relevant calculations.

First of all, we have the surface area of Cannubi proper, which is the largest: 19.53 hectares of which 98% is planted to vine of which 98.5% planted to Nebbiolo.

Cannubi Boschis or Cannubi: 12.41 hectares, 62% planted to vine of which 91% planted to Nebbiolo.

Cannubi Muscatel or Cannubi: 6.24 hecatres, 75% planted to vine of which 97% planted to Nebbiolo.

This is the accepted datum. And these figures translate into the total maximum production of 307.28 tons of grapes, which in turn represent 208,950 liters of vine (with a yield of 54.4 hectoliters per hectare) with a maximum of 278,600 750ml bottles.

These data are unquestionable. And I believe that it’s remarkable that we have managed to arrive at these data after more than 20 years of oftentimes heated debate in different forums, including the courtroom.

If a given producer wants to use the added designation vigna or vineyard (for example, Barolo Cannubi “vigna del presidente” or “president’s vineyard”), the maximum production allowed is reduced to 10%. That means that instead of 8 tons of grapes per hectare, you have 7.2. But if the producer decides to do an aggressive green harvest, for example, the amount produced can go even lower, to 6.5 or 6 tons per hectare.

Then there’s another variable: Outside producers who rent rows. In some cases in Cannubi, there are owners who rent all or a part of their vineyards to outside parties (and they have the ability to change renters after a certain number of years; as result, a brand that has Barolo Cannubi can later lose it if the owner decides to rent to someone else).

There are also those who vinify Barolo Cannubi and then sell certain amounts to outside parties and in doing so give those parties the right to use the designation on the label.

And then there are those who choose not to use the designation for whatever personal or corporate reason.

And here’s the rub: When you don’t have direct access to production data and designation rights with each vintage, it’s impossible to come up with precise figures. The only people who have access to these data are the officials who monitor production for the Barolo consortium. And this why the number of producers changes every year, usually somewhere between 25 and 28.

The most important thing, at least for me and for all those who love Barolo, is that the production of Cannubi is monitored by those who have been appointed to monitor it. And we are fortunate to have this system in place, beyond the idle chatter of certain producers or the marketing efforts of certain wineries who — let’s just say — like to play with the numbers.

I hope that I’ve helped to clear up some of the confusion and that I haven’t made things even more complicated!

But as a producer of Cannubi, I’d like to thank Alfonso for having raised an interesting question and for having prompted me to share my insights and make a small contribution to this debate.

And to anyone who has managed to get to the end of this letter, let me be the first to offer you a glass of Barolo Cannubi by Tenuta Carretta! Cheers!