Where does the word “barbecue” come from? We found out in Texas! 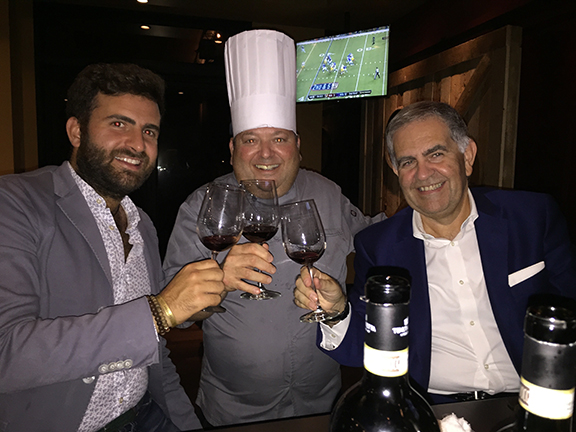 Above: One of the cooks at Hickory (center), a “contemporary concept” barbecue outfit in Plano (Dallas), took time out from his shift to taste some Nebbiolo and pose for a photo with Francesco (left) and Giovanni Minetti (right).

Today’s post marks the last in our series devoted to Francesco and Giovanni’s September visit to Texas. And as you can imagine, no Texas-centric blogging would be complete without mentioning Texas barbecue — a sine qua non of any Texas experience.

Francesco and Giovanni ate and sampled Texas barbecue in every city they visited: Houston, Austin, and Dallas.

You’ll note that I refer to this gastronomic category as Texas barbecue. Here in Texas, where I’m writing this, they simply call it barbecue. But for those reading this beyond Texas’ borders, it’s important to make the distinction between, say, Memphis barbecue, Carolina barbecue, and the Texas barbecue. Above: A brisket being placed into a smoker at Roegels Barbecue Co. in Houston, where we were hosted by Houston Chronicle barbecue critic J.C. Reid and his regular tasting group.

Brisket is the centerpiece cut of beef used in Texas barbecue. It’s the breast of the cow (petto in Italian).

Historically, traditionally, and still to this day, it was and is the favored piece to use because it’s one of the tougher and cheaper cuts. But through “low and slow” (low heat, extended cooking time) smoking it becomes extremely tender.

Just as panna cotta is a litmus test for any pan-Italian chef, so is brisket to the Texas smoker. Above: Beef ribs (top) are also a classic cut in Texas barbecue. They are often referred to as “brontosaurus” ribs (a popular allusion to “the Flintstones” cartoons). But, especially today, many Texas smokers, like Roegels, use different cuts of meat (prime rib is my personal favorite) and even different kinds of meat, like the lamb chops that have become the signature dish at Roegels.

During our Texas travels, Giovanni asked about the origin of the word barbecue. And to be honest, I didn’t know the answer and had to look it up.

According to the Oxford English Dictionary, it comes from the Spanish barbacoa, which in turn comes from the Haitian barbacoa, a term akin to barbacot, probably a French spelling of a word used by the Indians of Guyana.

It means a framework of sticks set upon posts used “for sleeping on, and for supporting above a fire meat that is to be smoked or dried.”

“A babracot,” wrote British colonial explorer and botanist Sir Everard Ferdinand im Thurn in 1883, “is a stage of green sticks built over a fire on which the meat is laid.”

And so once again, the wine road opens a window — for me and for the Minettis — onto a cultural expression that they (and I) wouldn’t have known otherwise. It’s one of the things that I love so much about working in wine: It becomes a pretext for learning so much about the world.

Now it’s time for us to turn our focus away from Texas and the U.S. and start looking carefully at the world of Piedmontese wines. Stay tuned!