Why is the anchovy so important in Piedmont gastronomy? 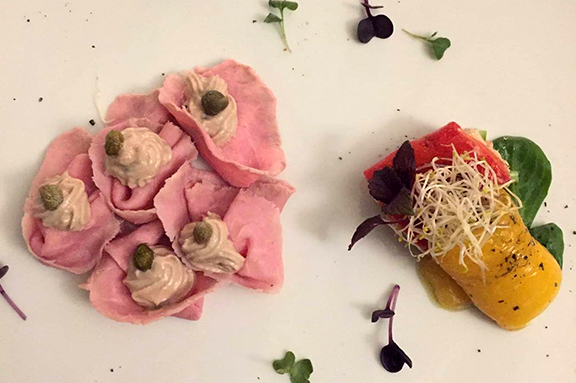 Click here for the complete series of posts devoted to vitello tonnato.

We just had to post the above photo of vitello tonnato by Tenuta Carretta’s good friend, the indomitable Giovanni Arcari.

He shared it with us after a recent visit to Piedmont wine country. Beautiful, isn’t it?

As we continue our series of posts devoted to vitello tonnato, its origins, recipes, and interpretations, it’s time to address a vexing conundrum: Why does the anchovy figure so prominently in Piedmont gastronomy? After all, Piedmont is Alpine region, hundreds of kilometers from the sea.

Yes, tuna also plays a fundamental role in the dish. It is called vitello tonnato or veal with tuna sauce.

But as we saw in our translation of Artusi’s early recipe, not only are anchovies used to season the sauce but they are also used to stud the veal before it is cooked.

No one really knows how the anchovy came to occupy such a prestigious position in the mountain cuisine of Piedmont.

But we do know that there is a long tradition of anchovy mongers there, the so called acciughai.

Most gastronomes point to the Valle Maira (the Maira Valley) in Cuneo province as the place of its origins.

We have to remember that until the contemporary era and Italy’s postwar “economic miracle” of the 1960s, Piedmont was a heavily depressed region. Just read a Cesare Pavese novel to get a sense of how tough times were there.

During the brutal winter, farmers from the Alpine valley needed to find other sources of incomes and so they would travel to the neighboring maritime region of Liguria where they could obtain salt-cured anchovies to sell back home.

The anchovies served a number of purposes because they provided not only easily stored sustenance but they also were a form of salt-delivery and thus seasoning (Artusi’s recipe is an example of this). Although no one knows for certain, some even believe that the anchovy was a way of disguising heavily taxed salt and avoiding tax collectors.

Vitello tonnato isn’t the only anchovy-centric dish in Piedmontese cookery: Bagna cauda and salsa verde are another two sine qua non of the gastronomic traditions there. Both of those recipes will be the subjects of future posts, btw.