The strange and wonderful marriage of tuna and veal #vitellotonnato 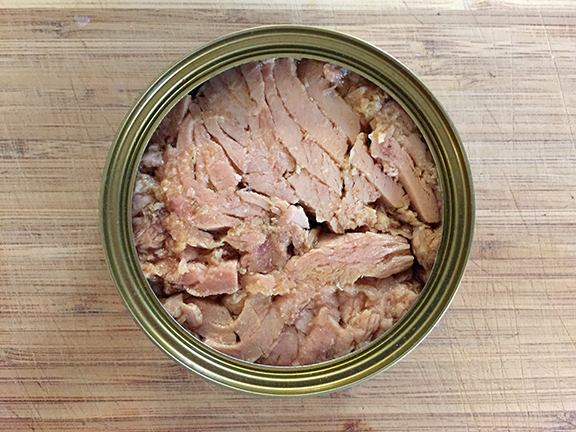 For the complete (and ongoing) series on vitello tonnato, click here.

The idea of using anchovies to stud and season veal before cooking doesn’t seem so far-fetched.

In our recent post about the origins and historic role of the salt-cured anchovy in Piedmontese cookery, we touched on the fact that the anchovy was, among other things, a salt-delivery system. And there are numerous instances in western cuisine where the anchovy is used to deliver intense saltiness to a dish. Just think of the classic pizza alla romana and the function of the anchovy in relation to the mozzarella, for example.

But canned tuna? To many, even today, that seems like a stretch.

Honestly, my research into the origins of jarred and canned tuna in Piedmont haven’t turned up much. But rest assured, I’ll get to the bottom of it.

In the meantime, I believe it’s useful to look at the legacy of cured tuna to help understand how and when it began to be applied in Piedmontese cuisine.

It’s widely know that Frenchman Nicolas Appert invented techniques for preserving fish in sealed jars around the end of the eighteenth-century. Once his jarring method was perfected, its application caught on immediately. It was a highly efficient means of feeding an army, for example, and provided a cheap and easily food source for Napoleon’s military campaigns (see this Wikipedia entry for canned fish).

Less than two decades later, Briton Peter Durand obtained his patent for techniques he had developed to can fish. And there’s no question that this was a major game-changer.

Not only was the new system for preserving food lighter and cheaper (than glass jars), it was also more efficient and less cumbersome and thus even easier to transport and ship.

Artusi published his recipe for vitello tonnato toward the end of the 19th century. As we noted in the critical apparatus that accompanies our translation of the recipe, it’s widely considered to be among the earliest if not the earliest published recipe.

But if Artusi included it in his influential cookery book, it must have already been a popular recipe in Italy, especially when you consider that Artusi lived in Emilia-Romagna (in Romagna to be precise) and that his recipe is clearly Piedmontese in origin.

I don’t have have any hard evidence to support this but I speculate that canned tuna had become popular in Piedmont because of how depressed the area was in the years that led up to and followed Italian independence in the second half of the 19th century.

It’s also important to consider how inaccessible parts of Piedmont were during winter months.

Canned tuna probably represented an excellent and cheap source of nutrition for the Piedmontese at the time. And because of their proximity to the Ligurian coast, they probably had access to tuna canneries there.

I’m going to continue working on the veal-tuna conundrum. So stay tuned. We will get to the bottom of this! Thanks for reading in the meantime.