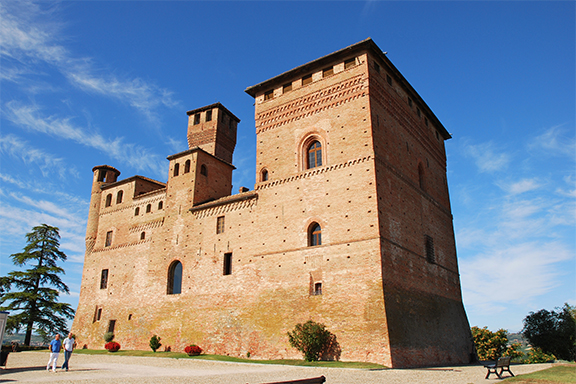 Last week, we published a translation of Camillo Cavour’s 1845 letter in which he writes of his newly conceived “enological crusade” to create Piedmontese wines that rival the wines of Burgundy for their quality. The wines of his native region, he notes, lack the refined bouquet of their French counterparts.

It’s a very powerful passage and it reveals a great deal about the origins of Barolo.

Camillo Benso, Count of Cavour (1810-1861), was an Italian statesman and a chief architect of Italy’s unification and liberation from the domination of foreign powers in 1861. Cavour served as the first prime minister of the newly formed Italian monarchy.

He was also a landowner, a gentlman farmer, and like many of his peers at the time, a winemaker by virute of the fact that wine was produced on his estate — most likely for local consumption and currency.

His family’s castello (above) in Grinzane township (now called Grinzane Cavour) still stands in the Barolo appellation, where it is home to a wine museum. (Grinzane is one of the 11 townships where Barolo DOCG can be produced).

Now back to the letter.

One of the most remarkable things about the letter is that Cavour is impressed by the quality and bouquet of the wine from Sizzano, which, today, lies roughly an hour and a half away by car (it was a lot longer journey in Cavour’s time). And at the same time he is dismissive of the wines grown what is now the Barolo appellation, his own backyard, so to speak.

In my view, this is an indication that Barolo was not a center for fine wine production at the time. As is made clear by the letter, Cavour knew the wines of Burgundy well and was surely well versed in fine wine.

I believe that this dispels the notion that the Langhe hills produced have produced some of the world’s best wines for centuries. In fact, I believe that the opposite is true: Langa was for the most part a highly depressed area. It was until after the Second World War and the economic miracle of the 1960s that Langa began to become an economic powerhouse (Angelo Gaja, for example, loves to remind people that the village of Barbaresco, now one on the world’s most exclusive destinations, didn’t have running water until the 1960s).

His newfound interest in a wine from Novara province is also an indication that winemaking there had already made great advances toward what it is today.

When you leaf through Italian wine books from the 1950s, for example, much more attention is paid to, say, Gattinara than to Barolo. And the fact of the matter is that winemaking in Novara and Vercelli provinces was relatively advanced by the time Italy’s economy began to come back to life in the post-war era.

The first time Barolo is recognized as a winemaking appellation was in 1933 when Italy’s Fascist government published its initial survey of the viticultural landscape at the time (the DOC was created in 1966).

Today, Cavour is widely credited with bringing Barolo into the modern era of winemaking. And in my ongoing research, I hope to uncover more documents that support this theory.

But from the time he wrote the letter in 1845 and his death in 1861, only 16 years passed and what hectic and frenetic years they must have been for him during Italy’s final wars of independence and his short tenure as the monarchy’s first prime minister.