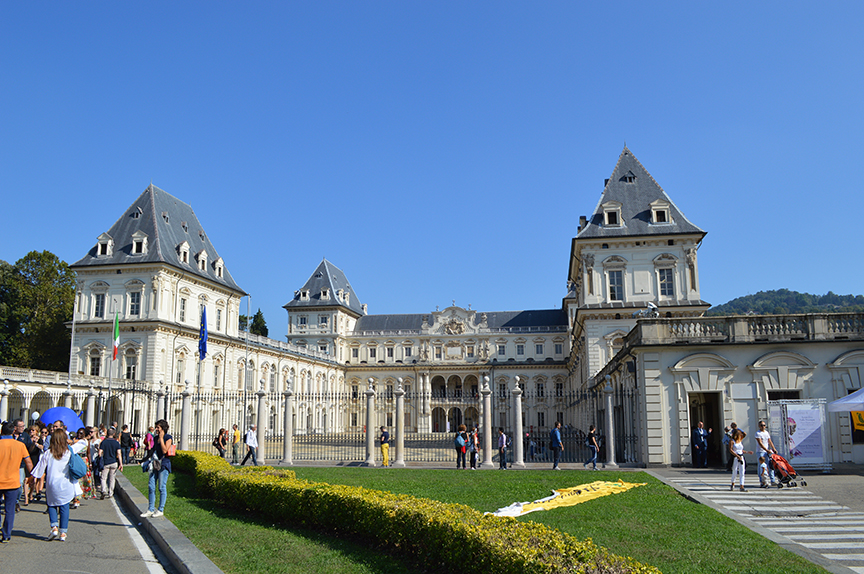 Above: The Castello del Valentino is one of Turin’s many extraordinary monuments and iconic buildings. The seat of the House of Savoy, Turin was Italy’s first capital in country’s modern era (1861).

It’s embarrassing to admit but I’ve never had a proper meal in Turin. I’ve visited there a few times and was there recently for last year’s Salone del Gusto. I didn’t eat in a restaurant on that occasion and the only other time I went there, on a job many years ago, I had a mediocre meal not worth writing home about (I was interpreting for an art collector who wanted to spend his budget on works of art and not on great meals!).

So today, when a friend from my years in Austin, Texas contacted me asking for recommendations (because he’s going to be there screening his new film), I turned to Facebook to crowd-source some recommendations.

The first that popped up was a link to a wine-food-culture blog that was launched last year by the communications firm that works with Tenuta Carretta, among others, the Grand Wine Tour.

One of those was for Ristorante Consorzio, a venue that seems to appear on a lot of “best” lists for Turin (thank you Carla Ranicki for that recommendation!).

Lastly, a friend and UniSG colleague recommended Magazzino 52, noting that it has a “top wine lisst and great menu, a modern bistro” (thank you Michele Fino for that one!).

Historically, Turin has always been a center for good eating and drinking in Italy. It is the home to the House of Savoy (one of the oldest royal families in the world) and it was Italy’s first capital as a unified country in the modern era (1861). During Italy’s industrialization, it became a capital for manufacturing and that brought with it a managerial class that needed fine-dining options. And today, it’s still one of Italy’s most vibrant metropoles.

And all of this leads me to the next question: What restaurants have the best wine lists in Turin? There are some famous ones… stay tuned…