Work begins anew in the vineyards with winter pruning 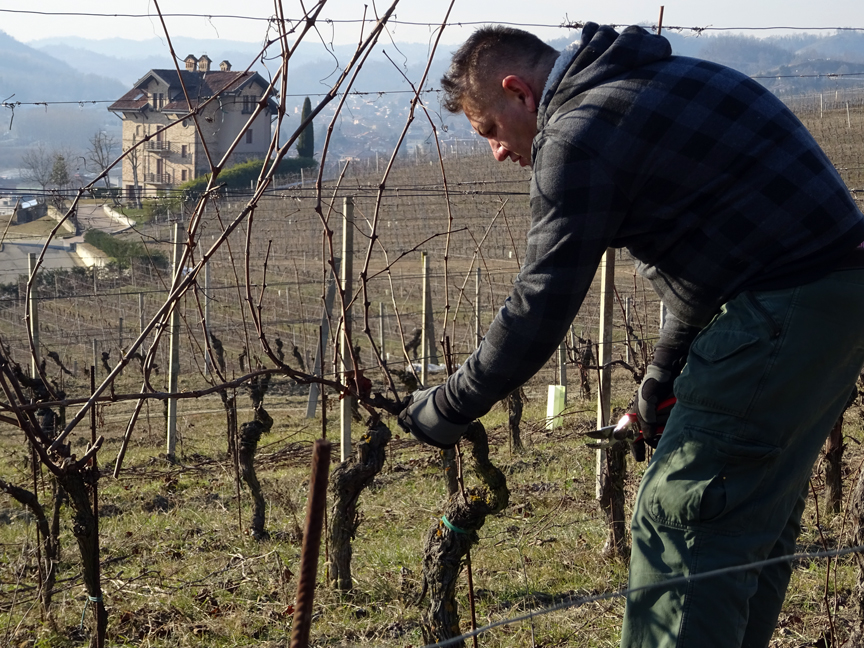 Today, it’s as if the vines were sleeping. Tomorrow they will bud and later they will give life to new berries. This is the vegetative cycle of the vine. During the cold winter months, it’s almost as if the vines were hibernating. And in doing so, they give the plants a welcomed opportunity to rest. When January rolls around and the solar year begins again, we start working in the vineyards and the vines, still sleeping, are once again the focus of our attention and efforts.

In order to better understand this process, we asked Tenuta Carretta’s vineyard manager to Giuseppe Cavallo to explain what winter pruning is and why it’s so important. Giuseppe, what’s the function of winter pruning?
“First of all, the goal is that of renewing the productive part of the plant. The vine, like every plant that bears fruit, produces its fruit on the wood from the year before. In other words, the wood that was formed from a cane from the previous year. Once the cane completes a vegetative cycle, it matures and turns into wood. And it becomes a base for generating new buds. In the traditional training system used in Piedmont, known as Guyot, only one of the “old” canes, in other words, one of the buds that has become wood, is left on the plant. That cane will become the new fruit cane. Generally, it’s usually one of the ones near the trunk. The fruit cane will support to a maximum of nine buds, which, in turn, will produce new canes, and, in turn, new grape bunches. Because the vines are each separate vegetal individuals and because they are all different from one another, their evolution is difficult to standardize. This is the reason that it’s a good practice to identify one “spur” as a preventative measure. It’s the portion of a cane with two buds that, when necessary, will serve as an alternative for the structural growth of the plant”. When is the best period for pruning the vines?
“Winter pruning takes quite a long time. It will be carried out between the beginning of December and the middle of March. That’s the period when the plants are dormant. The decision of when to begin pruning is based on the climatic conditions from the previous fall and whether or not they were favorable or adverse. When it comes to deciding the right moment to begin pruning, we always start on the later side. That’s because we prefer to fully respect the rhythms and natural cycles of the vine. Taking the greatest care of all plants will reward us later on. It will help it to increase the quality of the fruit, especially in the case of the vine, a plant that can live for 30-40 years”. Once you’re done pruning, what’s the next step?
Pruning is generally followed by thinning the shoots that have been pruned. Pruning is a delicate process intended to improve productivity. The pruners only prune the vines. The shoots are removed by the vineyard workers. Then the vines have to be tied. That’s when the fruit cane is arched. During the next months, the “green” or vegetative phase will begin. But we’ll save that for a future post”.