A Sharecropping Contract Dated November 28, 1467: This is where the story of Tenuta Carretta begins 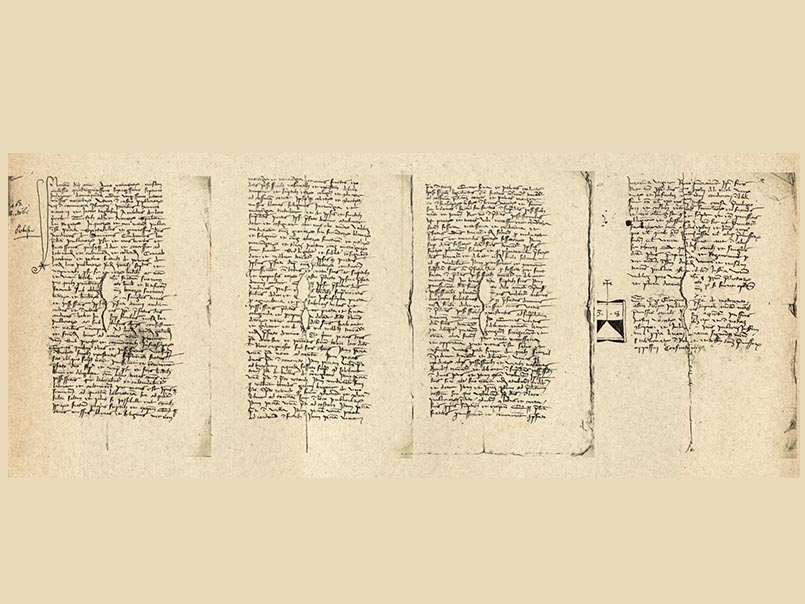 It was November 28, 1467. The setting was the Castle of Piobesi township. The lawyer Giorgio di Montecauto sat in one of the castle’s smaller rooms, one with a fireplace. He had begun drafting an important farming contract that we consider to be one of the earliest and most important mentions of grape growing on the Tenuta Carretta estate.

One of the lords of Piobesi was with him: Andrea Damiano together with the brothers Corrado, Giacomino, and Pietrino Porrino. They were joined by the witnesses, Enrico Navone and Giacomo Tagliaferro, both of whom were from the nearby township of Priocca. They were there to sign a sharecropping contract, one of the earliest forms of agricultural regulation.

Damiano wanted to give one of his farming properties to the Porrino brothers. The parcel in question was the Tenuta Carretta. The brothers would be tasked with farming the land and harvesting its crops for nine years. The document was written in Late Latin and was transcribed on vellum. It regulated the contractual arrangements with precise references to the way they needed to farm the land on the “cassina Careta.” To this day, vineyards still stand on that same land.

This document is of clear and extraordinary historical value. It is a genuine list of the responsibilities and procedures that sharecroppers had to observe in their farming practices. For example, “all the lands and the property will be seeded by at least the fourth plowing or by [the time] the fourth row has been tilled. All of the harvest, the fodder and the rye, not to mention the legumes and the winter grains, and all the existing and new fruits from this property will be harvested and delivered to the cassina Careta.”

As far as the vines were concerned, “the Porrino brothers will prune them diligently each year. They will trim and maintain them and they will also remove their shoots and leaves [at the appropriate time]. And they will do all of these things at the proper time and in accordance with custom.” In regard to the vines, the text reveals something truly fascinating: An explicit request by a nobleman regarding a precise area that was evidently already known for the high quality of the harvest.

One clause of the contract makes reference to the vines on the hill known as Podio. Those plants were to be reserved for the exclusive use of the nobleman and no one else was to be allowed to use them (“salvo et reservato vites Podi Serre, de quibus se nil impedire teneantur et debeant”).

This limit imposed on the sharecroppers reflected the clear assessment of the quality of the vineyard. At the time, it was a unique case in the history of the region.

As was common practice at the time, the document closes with a oath to be take by all parties: “The brothers and everyone else present will swear on the Holy Saints and they will lay their hands on the holy scriptures that I am holding in keeping that oath. And those same brothers, as well as the lord, will relinquish any other claims.”