Tavoleto and Podio, The soft elegance of Nebbiolo 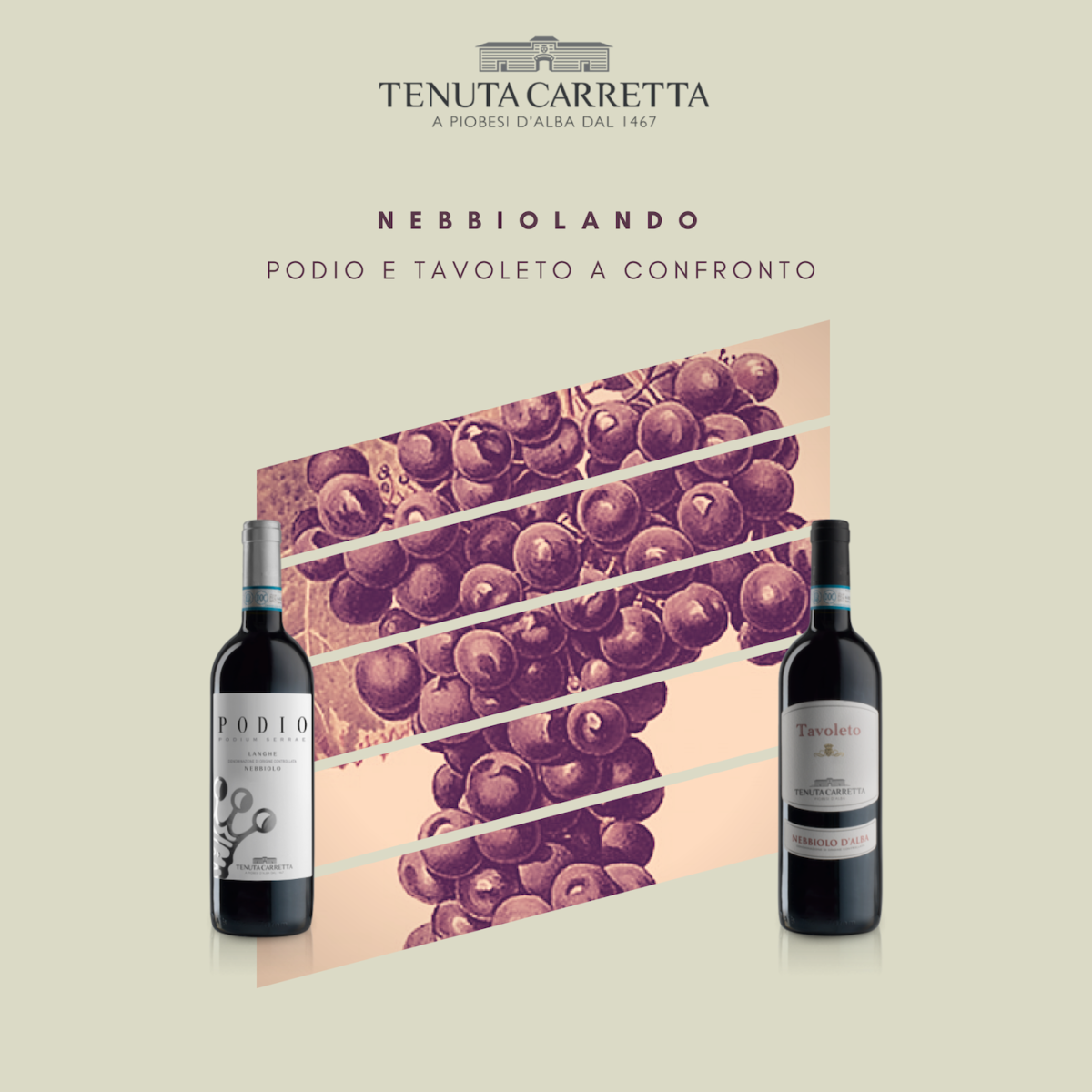 We continue to speak about the Nebbiolo grape in this post. It is the principal variety of Piedmont that grows on the hills of the Langhe and Roero in many shades. It becomes diverse wines, each extremely characteristic and with a special profile.

To make it easier to describe these differences, let’s look at two of our labels: Langhe Nebbiolo DOC Podio and Nebbiolo d’Alba DOC Tavoleto.

Nebbiolo is a multi-facted wine

Nebbiolo is a wine that has been on the rise, gaining a lot of attention and acclaim in the wine world. Why? Because it is the son of Barolo and Barbaresco, made from the same grape that becomes the King and Queen of Piedmont, with a smaller price tag and a profile that is more accessible.

Nebbiolo is the most historic red wine variety native to Piedmont. Although you may find it growing in other parts to the world, its full power is only on display in this region. That is because it is a vine that is heavily influenced by its terroir, it ‘soaks’ up the secret flavours of the soil and transfers them into the glass for all to enjoy. Generally, soils richer in marl, like those in the Langhe where we grow the grapes for our Tavoleto, give wines with more structure, complexity and body. Sandier and more calcium-rich roils, like those in Roero where we grow the grapes for our Podio label, create more aromatic wines that lack a bit of structure but are very fresh.

The name is in the story

Podio is named after Podium Serrae, that place that signals the beginning of Tenuta Carretta’s story. A sharecropper’s document from the 28th of November 1467 outlines the positive nature of the vineyards in this area, the grapes were turned to wine at the castle and the vines at Podium Serrae were preserved under the auspices of the feudal lord.

Podio is a blend of 85% Nebbiolo and 10% Barbera. The soils that grapes grow in are Pliocene in origin, which is typical of Roero on the left bank of the Tanaro river. These are ancient coastal sea beds that emerged when the waters drew away from the land around 5 million years ago. The soils are younger than those in the Langhe with higher concentrations of sand. The presence of limestone in the soils is characteristic of the Roero, which is no surprise since fossils can still be found in the ground. This terroir becomes a Nebbiolo wine that is aromatic, with a soft structure and little complexity, the tannins sweet in the mouth and a richness of flavours.

This is one of our most beloved labels. An introduction to Nebbiolo that plays pleasantly with softness, velvety tannins and simple elegance. Full of fruity aromas with traces of earthy notes such as mulberry, spices, black pepper and vanilla.

Tenuta Carretta cultivates Nebbiolo over 8 hecatres of vineyards in San Rocco Seno d’Elvio, a hamlet of the Municipality of Alba. The San Rocco hills are secluded and pristine, even if just a few kilmotres away from the busy capital of the Langhe. These are Tavoleto vineyards. They are steep and sunny, surrounded by hazelnut groves and thickets. The Rocche, small chasms in the ground caused by groundwater erosion, are the defining characteristics of these hills, and give them their name! In the nearby town of Treiso, you can see the most famous of these, the Rocche dei sette Fratelli (The Rocche of Seven Brothers).

San Rocco is the only hamlet of Alba that actually falls under the Barbaresco appellation. Situated on the right bank of the Tanaro, the soils here are of Miocene origin, dating back 15 million years. In contrast to Roero, which were coastal sea beds, the Langhe used to be the deep-sea floor so the soils are more compact and solid, made of layers of clay-marl and tufa. This terroir presents in Nebbiolos of full-body and structure with elegant and mellow tannins.

Nebbiolo d’Alba Tavoleto, a single-variety Nebbiolo wine, unveils the noble nature of the vine while maintaining a more youthful profile than the heavy-hitting and austere Barolo and Barbaresco wines. It is bright and fresh, a balanced wine that is easy to drink and great for a dinner with friends. Pair it with meat and cheese boards, or even with pasta dishes, its sweet and delicate tannins don’t overpower and the flavour lingers in the palate.