Cascina Bordino Everything You Need To Know About The Unclaimed Mega 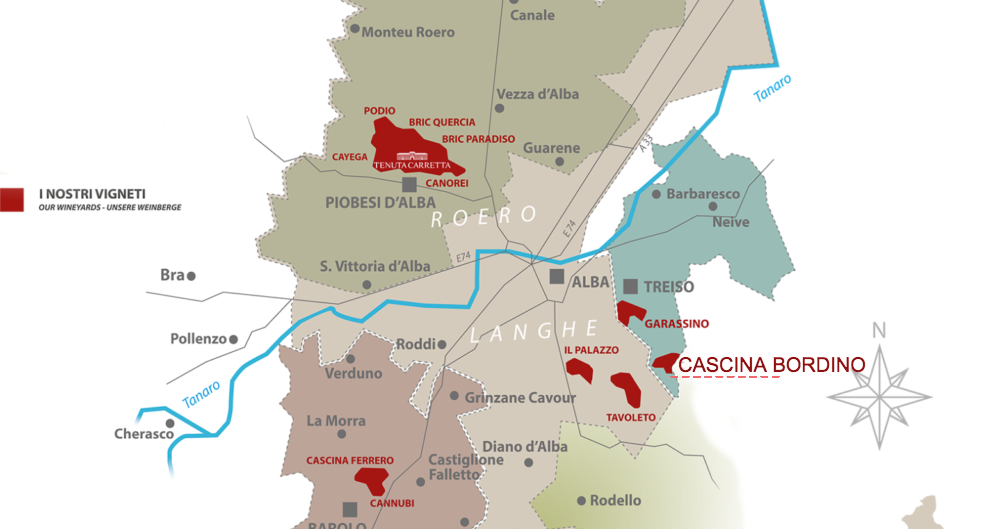 Cascina Bordino is a vineyard plot within the municipality of Treiso, a town located a few kilometres from Alba.

We are in the north-east of Langhe, on those hills overlooking the banks of the Tanaro River, east of Alba, and bordering with the first hills of central-western Monferrato. The municipality of Treiso is one of the four municipalities – together with Neive, Barbaresco (the municipality after which the wine is named) and Alba, which is part of the production thanks to the hamlet of San Rocco Seno d’Elvio – where Barbaresco wine can originate from.

The territory of the town of Treiso has a shape similar to a wedge that extends to the south towards the “Alta Langa” area, divided into two portions and crossed by the Provincial Road 138: the northern portion, partly delimited by the Tinella stream, is bordered by Barbaresco; the southern one ends in Mompiano, a hamlet of Trezzo Tinella.

The area of Treiso has a particular climate, which averagely registers slightly cooler temperatures than the neighbouring areas, and altitude, which reaches 425 meters in Cappelletto, compared to the 300 metres of the tallest ridges of Neive and the 270 metres of those of Barbaresco.

The vineyards of Cascina Bordino extend within a large planted area in the east of the town of Treiso, locally called Sant’Alessandro, and curiously is not included in any Barbaresco MGA. This happened not because the vineyards of Cascina Bordino were considered to be of lesser value, but because at the time of the definition of the MGAs (a long and tiring work that began in the late 1980s and ended on February 21, 2007 with its inclusion in the production regulation) no one has claimed the area with this name.

As Alessandro Masnaghetti writes in his fundamental book Barbaresco MGA, in an initial draft of the new regulation, it has been decided to divide the area in the east of Treiso into three MeGAs: Bungioan, Canta and Sant’Alessandro (within which the vineyards of Cascina Bordino would have been included). «Among these – Masnaghetti writes – the west side of Canta and Cascina Bordino would certainly have deserved official recognition» precisely because, as the journalist and cartographer continues, «Cascina Bordino was the only one vinified in purity».

The area has been previously reported by Luigi Veronelli and Sheldon Wasserman: the former is the father of Italian wine criticism and pioneer of zoning; the latter is the author of the very important work Italy’s Noble Red Wines, an essential element to get to know the wine and ampelographic production of the Belpaese in the early 1980s: «A small hill ridge whose south-east facing slope has a highly suitable position for Nebbiolo», concludes Masnaghetti.

Cascina Bordino has been part of the Tenuta Carretta estate since 1992 and its grapes have been vinified in purity at least since 1989, first as Barbaresco Poderi Bordino and, from the 1993 vintage, with the name of Cascina Bordino. About 3 and a half hectares which, starting from the 2012 vintage, Tenuta Carretta decided to develop by incrementing the aging time of the Barbaresco produced here in order to be able to put Riserva on the label: a wine that matures for more than 50 months, of which at least 9 in oak barrels.

In particular, the grapes used for the production of Cascina Bordino Barbaresco Riserva DOCG enjoy locations with the best exposure of the entire ridge, characterized by steep slopes and sandstone soil with some gray silty marl (that dates back to the Tortonian: marls of Sant’Agata Fossili), which make the soil thin and compact and from which nebbiolo grapes suitable for long macerations usually originate. A prominent Barbaresco wine is thus obtained, characterized by aromatic intensity, elegance and complexity. A Barbaresco that, together with Barolo Cannubi and Roero Bric Paradiso Riserva, embodies and expresses the company’s long history and passion for great nebbiolo-based wines. A production of excellence that is fruit of attentive harvesting and vinification with long maceration periods, which reveals intense aromas of violet and ripe red fruit accompanied by spicy and ethereal notes and fullness on the palate, thanks to thick and silky tannins.